A carrier-capable Night fighter jet aircraft manufactured by the Douglas Aircraft Company in El Segundo, California was employed by the US Navy and Marines.  The first flight of the XF3D-1 occurred on 23 March 1948.  28 F3D-1s were built and the F3D-2 was first ordered in August 1949 with a total of 237 F3D-2s built before production ended on 23 March 1952.

Cockpit
– Pilot and Radar Operator (RO) seated side by side.
– Cockpit was pressurized and air conditioned.
– Had a built-in cigarette lighter but no cup holders.

The F3D-2 had no ejection seats.  An escape hatch was located at the rear of the cockpit which allowed the crew to slide down an angled chute which passed between the jet engines and exited the underside of the fuselage. 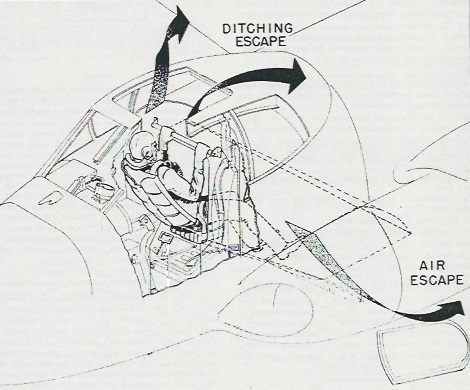 In June 1952, land based US Marine Night Fighter Squadron VMF(N)-513  “Flying Nightmares” (tail code WF) received their first F3D-2s.  Initially designed to shoot down bombers, they were painted black and performed night fighter sweeps ahead of USAF B-29 bombers night raids over North Korean targets.  The unusual portly profile earned it the nickname “Willie the Whale”.

Although the F3D-2 was equipped with radar, the Migs were not and relied  on directions provided from Ground Controlled Intercept (GCI) radar.   When the enemy GCI controller detects an intruder (F3D-2) entering their sector, they scrambled 4 to 6 Migs and have them orbit the area in circular pattern and waited.  Once the intruder got close enough, the CGI controller directed the nearest Mig to a course in front of the intruder to become bait.  When the intruder tracked and locked on the Mig bait, the other Migs were then directed to the tail of the intruder.  In this situation, the F3D-2 tail radar provided ample warning  to the F3D-2 pilot allowing him to either break off the engagement or turn the tables on the pursuing Migs.  Due to its straight wings, the F3D-2 was able to out turn the Mig-15 in a dog fight.  The Mig could not react as quickly since they had to receive directions from their GCI controller.

After the Korean war, the squadron mainly operated out of NAS Atsugi, Japan. VMF(N)-513 was later re-designated VMF(AW)-513 and continued to operate the F3D-2 from bases in Korea and Japan.

US Marine Composite Reconnaissance Squadron One VMCJ-1 “Golden Hawks” began operating the EF-10B in Vietnam on 17 April 1965 at Da Nang Air Base with six aircraft.  The Electronic Warfare (EW) Skyknight was employed to jam NVA SA-2 surface-to-air missiles (SAM) and AAA guns tracking/guidance systems. VMCJ-1 made history when the EF-10Bs conducted the first USMC airborne radar jamming mission on 29 April 1965 supporting a USAF strike mission.  On 27 July 1965 under code name “Spring High”, six EF-10Bs supported a massive strike against new SA-2 SAM sites near Hanoi, North Vietnam.  Gradually the EF-10B was replaced by the EA-6A Intruder.  The EF-10B continued to fly low threat EW missions until they were withdrawn from Vietnam in October 1969.  In Vietnam, the EF-10B was nicknamed the “drut.”  Note the name when spelled backwards.

The US Marine Corps retired its last EF-10Bs in June 1970.    In 1968, three Skyknights were transferred to the U.S. Army.     These aircraft were operated by the Raytheon Corporation at Holloman AFB  where they were used as test planes at the White Sands Missile Range into the 1980’s.    These were the last flyable Skyknights.