The British Matilda A12 tank was a 60,000 lbs. (27 tons) infantry tank armed with a QF 2 Pounder (40mm, 1.57 inch) gun and a coaxial Besa 7.92mm machine gun.   One of the weaknesses of the Matilda II was the lack of a high-explosive round for its main gun.  The Matilda’s main strength was its heavy armour with a maximum frontal armour thickness of 78-80mm (about 3.1 inches).  During the North Africa campaign against the Italians in 1940, the Matilda was superior to the slow under armed and armoured Italian tanks earning the nicknamed “Queen of the Desert”.

Although a female name, ‘Matilda’ is of old German origin which means “mighty in battle” or “battle-mighty”.  Matilda of Flanders, queen of William the Conqueror in the 11th century brought the name to Britain.  The Australian song ‘Waltzing Matilda’ did not refer to a woman but is slang for itinerant laborers travelling on foot (waltzing) with their belongings in a “matilda” (swag or bedroll) slung over their backs.

In early 1941 when the German Afrika Korps entered the desert war, the situation had changed.  Although the Matilda’s armour was thicker than the armour of the German PzKpfw IIIs and PzKpfw IVDs that were in service at that time, the faster German tanks were being increasingly up armed with more superior guns and the Matildas were lured or directed into traps with well-placed 88mm Flak guns (in the AT role) which could penetrate over 84mm (3.3 inches) of armor at a range of 2 km (1.2 miles).  The Matilda’s days as a frontline battle tank were limited.

Operation Crusader was a military operation by the British Eighth Army between 18 November to 30 December 1941 with the objective to relieve the besieged port of Tobruk in Libya.

Tamiya release two kits of the Matilda and both have the same marking options: 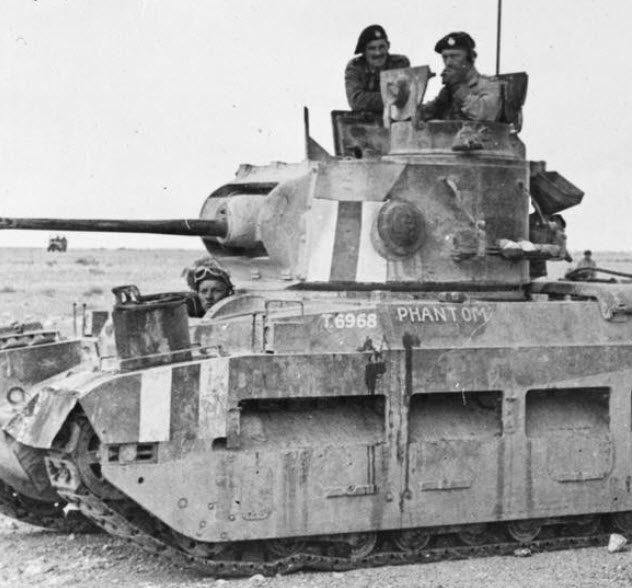 The 42nd RTR was formed by converting the 7th (23rd London) Battalion, East Surrey Regiment, a Territorial Army infantry battalion, into an armour unit.  This Matilda carries the Royal Armoured Corps (RAC) flash |White|Red|White| which dates back to WWI.  Matilda ‘Phantom’ has a number “10” behind the flash on the turret which is partially covered by an infantry helmet hung on the turret side lifting ring.  The “10” probably was either the tank or the troop number. 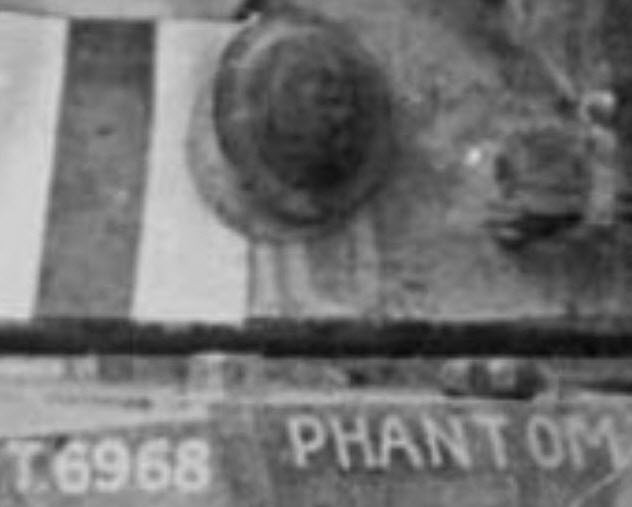 Most published drawings/artwork and the Tamiya kit decal sheets does not include this marking. 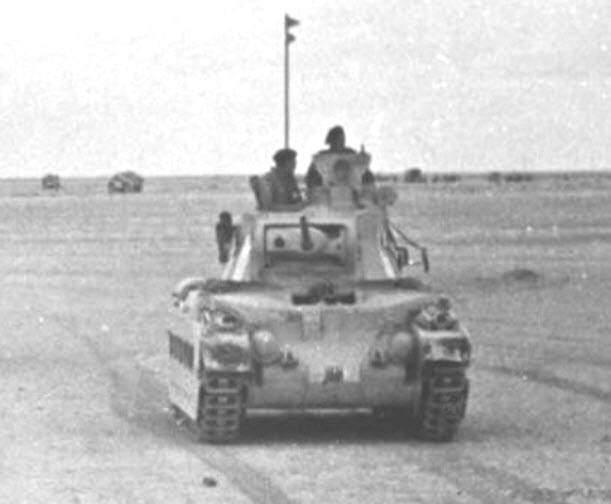 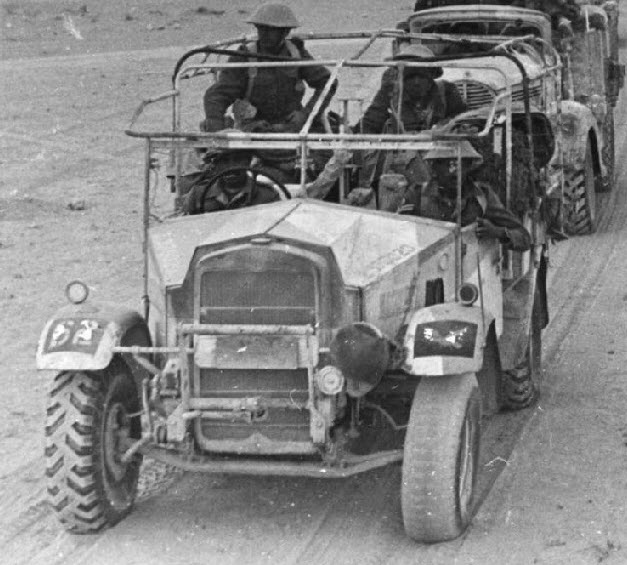 This is the formation sign for the 4th Indian Infantry Division.

BATTLE OF THE OMARS 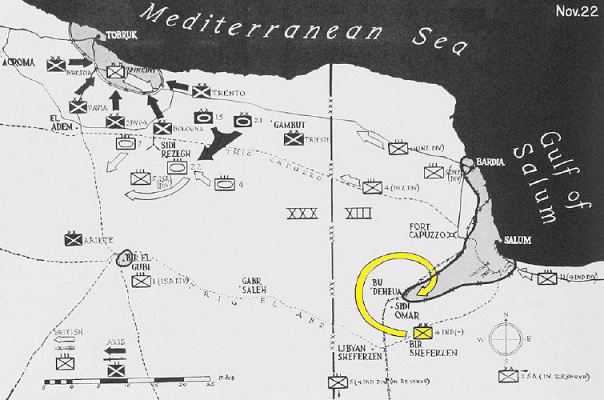 On 22 November in the 13th Corps sector, the 4th Indian Infantry Division (Sussex and Punjab regiments) supported by 1st Army Tank Brigade (42nd RTR minus C Squadron and with B Squadron 44th RTR under command) crossed the border near Bir Sheferzen and attacked the fortified camps north of Sidi Omar with the Sikh regiment held in reserve.   There were two camps to capture, Omar Nuovo and Libyan Omar.  The Sussex regiment and Matildas attacked  Omar Nuovo from the rear but ran into a minefield and the immobilized leading squadron came under fire from a troop of dug-in German 88mm AT guns.  Part of the second squadron found a way into the camp, maneuvered behind the gun positions and silenced the gun crews.   At Libyan Omar, the Punjab regiment and the leading Matilda squadron was also confronted by the dreaded 88s and took heavy losses.  The second wave of 11 Matildas were able to break into the camp and the following infantry mopped up.  After the battle, the repairable Matildas were recovered and transported to the 1st Army Tank Brigade’s workshops located near Sidi Azeiz for repairs. 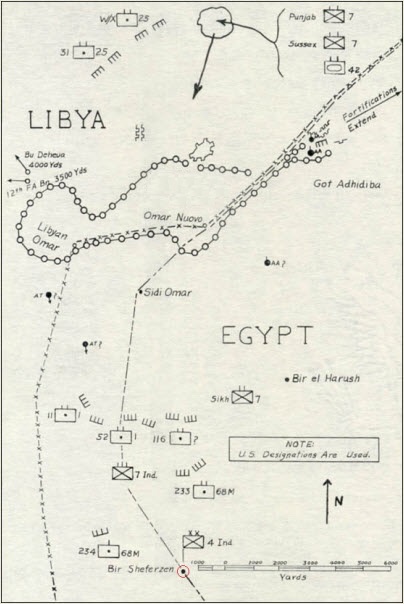 The thick turret of a Matilda penetrated in three places by a German 88mm AT gun. 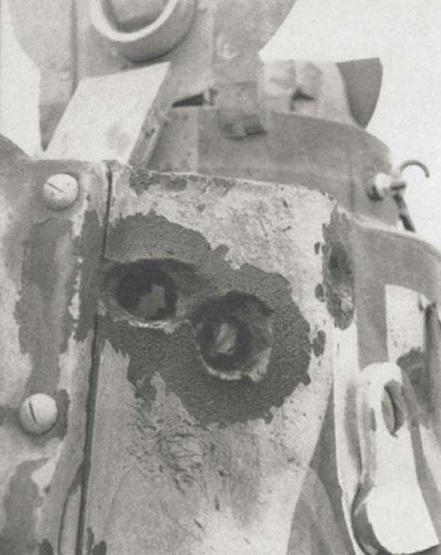 On 23 November after the British heavy losses two days before, Rommel ordered his “Dash to the wire” which directed the 15th and 21st Panzer Divisions to advance southeast towards the Egyptian border in an attempt to cut off the allies communications and supply lines.  At that time, Rommel was unaware that the Allies had captured the forts around Sidi Omar.  Part of  the 21st Panzer Division attempted to by-pass the British held Omars but received a plastering from British artillery 25 pounders leaving 18 knocked out panzers behind them for demolition by British REME units. 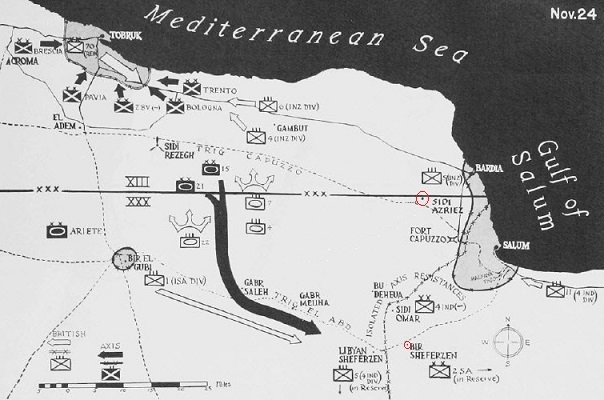 On 24 November at about 1700 hours just before dark, elements of Panzer regiment 5, 21st Panzer Division reached Bir Sherferzen and encountered the remaining 5 Matildas of 42nd RTR (some of the crewmen were from the 44th RTR).  The small force held the Bir Sherferzen gap for several hours, conducted a mobile defense and repelled several German attacks until forced to withdraw due to casualties where Squadron Commander Major R.M. Rawlins was KIA and another Matilda was lost.   Matilda ‘Phantom’ was probably one of the survivors.

On 25 November just before reaching the Omars, the 15th Panzer Division changed direction and headed northeast towards Sidi Azeiz.  In the afternoon, a German armoured column attacked the 1st Army Tank Brigade’s workshops near Sidi Azeiz which had sixteen 42nd and 44th RTR Matildas under repair.  A number of brave RTR crews manned the turret guns of the immobilized Matildas and fought the vastly superior Axis force.  The battle only lasted 1 1/2 hours and before the last Matilda was silenced, two PzKpfw IIIs were knocked out and a large ammo lorry was blown up.  The heroic crew’s actions allowed the repair section technical personnel to scatter and most to escape capture.

Some translations of Arabic terms in the Libyan Desert: 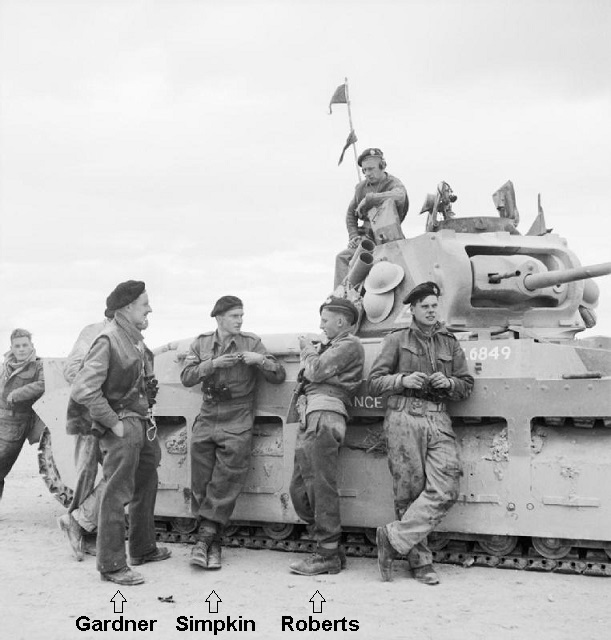 The Tamiya kit decal sheets has the War Department cenus number for Matilda ‘Defiance’ incorrect as “T6949”.   This is easy to correct.

Note behind the crewman’s head on the turret side appears part of a triangle tactical symbol with probably a number “4”  which would indicate the 4th Troop of A Squadron.  The Tamiya kit decal sheets does not include this marking. 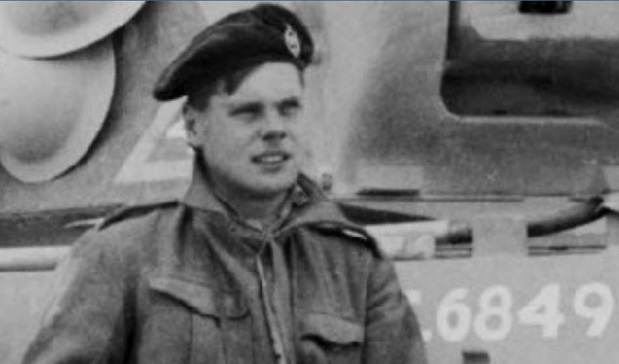 At 0630 hours on November 21, amid an artillery bombardment, D squadron 7th RTR leading the King’s Own Regiment attacked point Butch to the northeast and and took several hundred POWs.  The 4th RTR suffered delays while crossing the anti-tank ditch at the start line and the 2nd battalion Black Watch advanced on without them to point Jill where were they received heavy fire and took heavy casualties.  The Black Watch received help from some tanks of D squadron 7th RTR and a company of the King’s Own regiment which came from point Butch and secured the objective.

The Black Watch then attempted to press on to point Tiger which was equally strongly held and had to go to ground.  After clearing the anti-tank ditch, the 4th RTR had advanced but were held up by a minefield west and north of point Tiger.  While B and C squadrons battered the enemy with 2 pounder and MG fire, A squadron executed a sweeping maneuver to outflank the objective from the rear.  The Black Watch then rushed the position by bayonet charge allowing B and C squadrons to move forward.

After point Tiger was secured, it received fire from point Jack to the northeast and then a company supported by 4th RTR Matildas attacked point Jack pacified the area.  It was discovered that point Jack was a German battalion HQ and intelligence documents of the area were found.  To the south, point Tugun was assaulted by D squadron 7th RTR and a company of the 1st Bedfordshire and Hertfordshire Regiment.  Although the German lines was dented but there was no breakout and due to development elsewhere, the Tobruk garrison ceased any outward attacks and just consolidated their current gains. 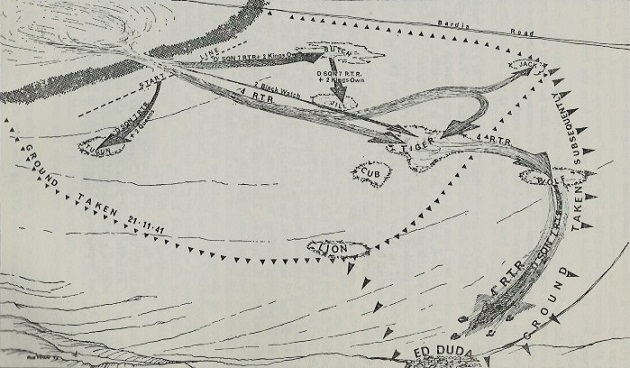 On November 23, Pip Gardner was ordered to take two Matildas to rescue two King’s Dragoon Guards armoured cars which were out of action and under heavy fire.  While one tank gave covering fire, Gardner dismounted from the other in the face of heavy fire, hitched a tow rope to one of the armoured cars, then lifted onto it a wounded officer, Lt Beame.  The tow rope broke, so Gardner ran back to the armoured car but was immediately wounded in the neck, arm and leg. Despite his wounds, he still managed to carry the wounded officer to the second Matilda and returned to British lines through intense shell-fire.  Gardner was awarded the Victoria Cross for this action.   Although Pip Gardner is seen standing next to Matilda ‘Defiance’ in the photo above, there seems to be no information available about the two Matilda tanks which he took to rescue the two armoured cars. 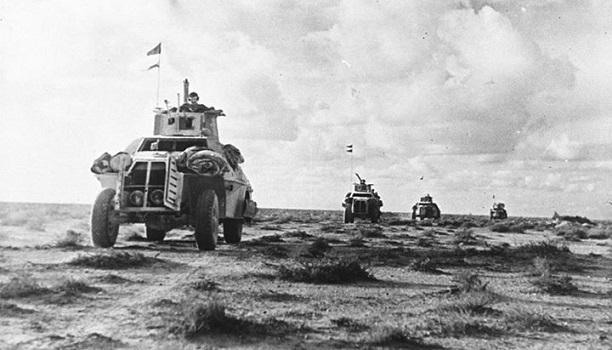 On the evening of November 25, the 2nd New Zealand Infantry Division supported by the 1st Army Tank Brigade (A and C Squadron 44th RTR and the 8th RTR equipped with Valentine tanks) had advanced west and had taken Belhamed which was only 4.5 miles(7.2 km) east of Ed Duda. The Tobruk garrison renewed its breakout and during the night attacked point Wolf which was to east of point Tiger.  The 4th RTR led the attack and after heavy fighting, point Wolf was secured by dawn.  At midday on November 26, the garrison forces made a dash from point Wolf to take Ed Duda.  The 4th RTR Matildas swept ahead at top speed and reached Ed Duda in 20 minutes and scrambled up the wadis to the top of the escarpment.  B squadron overran a battery of guns covering the Axis by-pass road and the ridge and Ed Duda was then consolidated by the infantry. 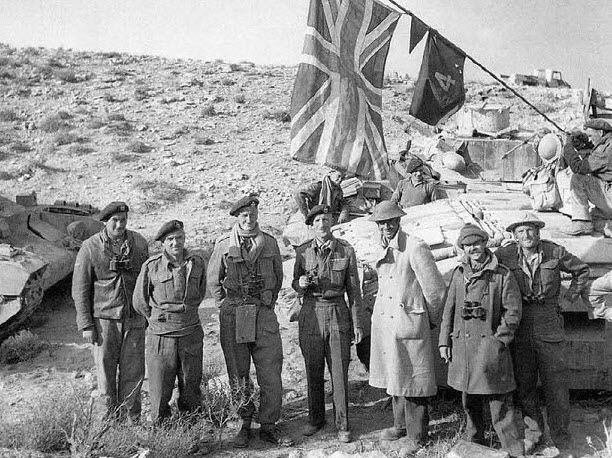 During the night of November 26, the 44th RTR executed an expertly planned night attack from Belhamed to Ed Duda.  The Matildas crossed the start line without any preliminary artillery barrage and 16 masses of the leading wave with their Besas firing tracer rounds and the infantry following behind in their tracks.  Forty five minutes after the attack began, the 44th RTR crews were shaking hands with the Tobruk garrison.  The operation was so effective, Rommel redirected his panzer divisions north and then westward towards the 2nd New Zealander Division’s rear. 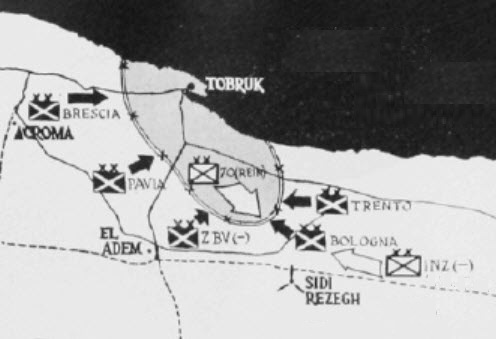 A and B Companies of the 19th New Zealand battalion passing Matilda ‘Defiance’ as part of a thrust from Ed Duda to link up with the New Zealand 6th Brigade, 27 November 1941.  The infantry were soon recalled. 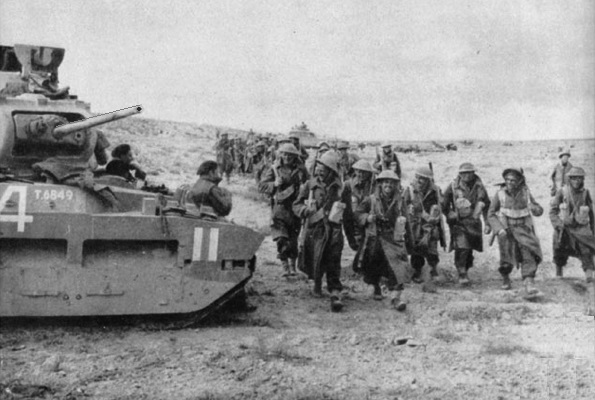 The 4th RTR CO command Matilda and a truck outside the Tobruk enclave, 28 November 1941.  Note the sandbags on the Matilda’s front hull around the turret. 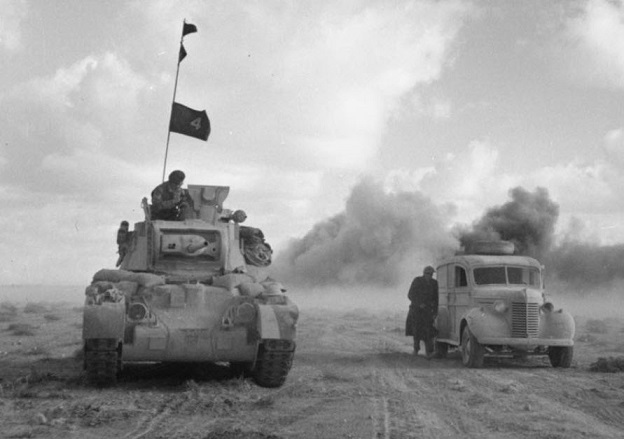 This Matilda has a POW rack attached to the rear hull.  The rack designed to hold six British “flimsies” cans containing water or fuel (unlikely). 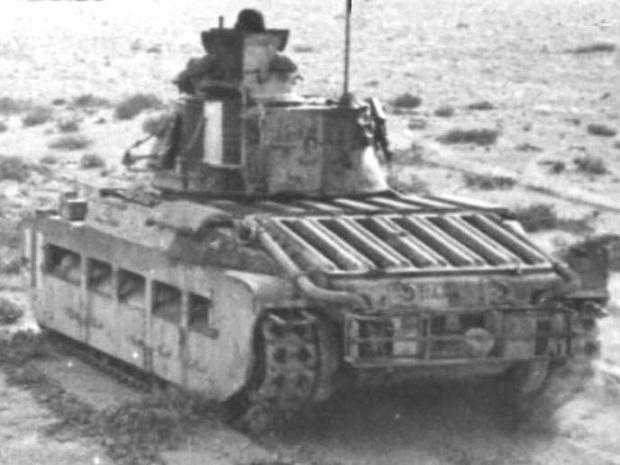 Over the next few days, a series of attritional engagements took place in the Belhamed Sidi Rezegh area, and eventually the New Zealanders were forced to withdraw leaving Tobruk isolated again.  On 10 December 1941, Trobruk was finally liberated and the British Eighth Army was moving westward behind the retreating Axis forces.

Is that a woman and what would she be doing inside the armoured car? 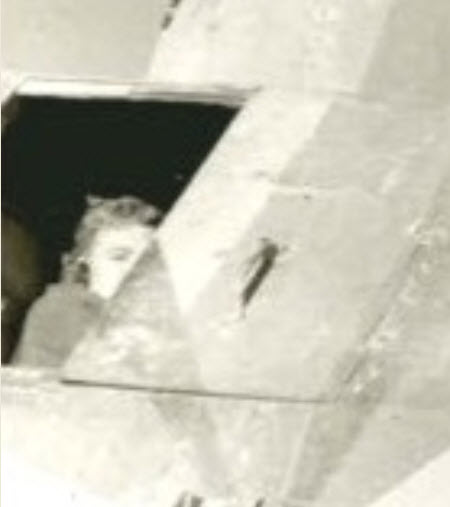 The 4th RTR surrendered at Tobruk on 21 June 1942 when the Afrika Korps captured the port.

From 1/35th decal sheet Quartermaster’s Depot 35088 British WWII Tanks in UK #1, the triangle and number “1” is yellow instead of red as on the Tamyia decal sheets.

In late 1940, the 49th RTR received new Matilda II tanks and began intensive infantry tank training on the South Downs.  In January 1942, the 49th RTR moved to Lowther Castle, near Penrith, for training as a night fighting tank battalion and was equipped with Matilda CDLs (Canal Defence Lights) and during this period the 49 RTR joined the 35th Army Tank Brigade. In July 1943, the Matilda CDLs were replaced by Grant tank CDLs and later equipped with Sherman tanks the 49th RTR formed part of the 79th Armoured Division in Normandy 1944.  Was not able to find any photo of  Matilda ‘Filibuster’ and the 49th RTR did not use the Matilda in combat.