Operation Ripper (6-31 March 1951) was a main UN offensive during the Korean war with the objective of liberating the South Korea capital Seoul and to force the communist forces back to the 38th Parallel.   The Chinese did not have any tanks and the North Koreans lost most of their tanks during the fighting in 1950.   The main threat was the Chinese massive human wave attacks which demoralized the US troops since the Chinese entered the war in October of 1950.

For this offensive, the US Army employed a bit of psychological warfare on the Chinese who were supposedly superstitious of tigers and dragons.   According to the Chinese Zodiac calendar, the Tiger is considered to be brave, cruel, forceful, stately and terrifying, the symbol of power and lordliness.   In ancient times, the Chinese people usually compared emperors or grandees with the tiger.   To boost the moral of the UN troops and to instill fear in the Chinese, the US tank crews were instructed to paint their tanks with tiger heads/faces, bloody sharp teeth and claws.   These schemes were the most elaborate colorful markings ever applied to US tanks. 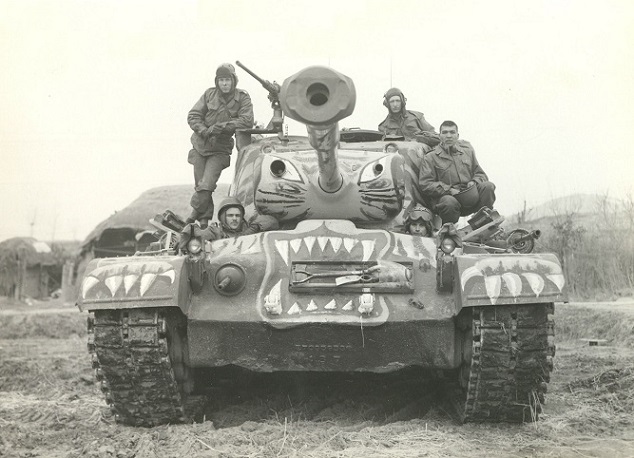 After the offensive ended, the guise was no longer needed and the paint schemes were either faded from exposure or were over painted.   In April 1951, the Chinese launched a counter offensive which retook most of the ground gained during Ripper but were not able to retake Seoul.   The front lines then stabilized and armistice talks began on 10 July 1951 which dragged on for two years while the fighting continued.   During this period, the UN tanks manned ridge top positions which provided fire support for infantry patrols in No man’s land and they became very effective at busting enemy bunkers along the front lines.

These M4A3E8s carry one of the most elaborate schemes during the “tiger” period.   The front hull and turret was painted tan and then hundreds of small green squiggles were hand painted over it to make a background for the eyes and a large leering mouth with red lips and sharp teeth. 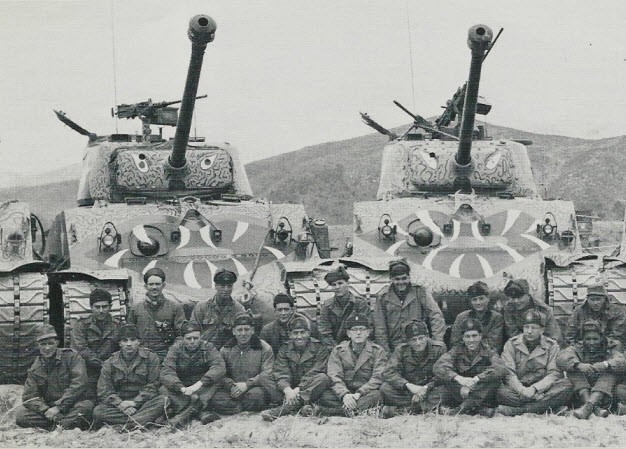 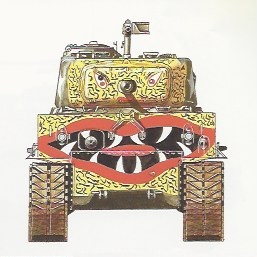 Company C departed from the battalion’s standard scheme and adopted a more simplified devil motif on frontal armor of their tanks. 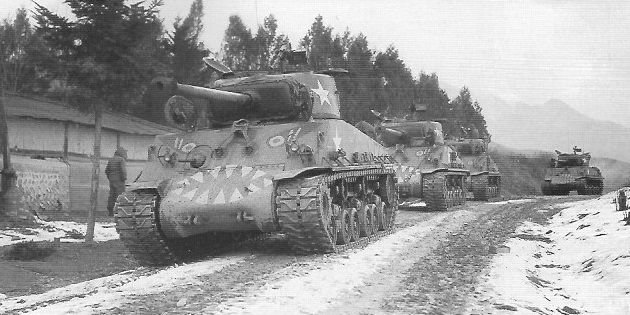 All the tanks in this company carried the name “Rice’s Red Devils” on the turret with the word “Red” painted in red on the turret star.   The unit was named after it commanding officer, Captain Clifford Rice.   Note the crude hand painted stars on this tank. 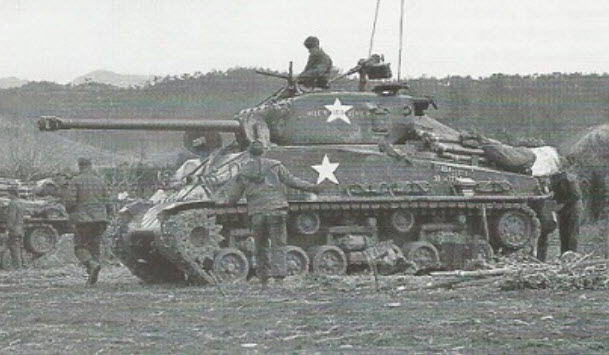 This M4A3E8 advances across a rocky field near the Han River. 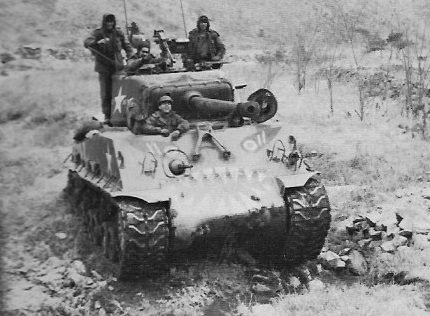 This M4A3E8 just crossed the Han River near Unchon-ni.   The lower half of the front hull appears darker because it is wet.

For the past six decades, all sources showed or indicated that the front hull was painted the standard Olive Drab.   These photos could have been in private collections for all these years and were only recently released to the public.

It is possible that some tanks in the unit were painted in this scheme and it does makes logical sense since the devil is often envisioned as being overall red. But there is also the possibility that these photos were colorized.

Company A was the only company in the 79th Tank Battalion and was equipped with only M24 Chaffee light tanks.   This was one of the first US armor units that was deployed to Korea after the breakout of the war in July 1950.   The surviving M24s of this unit carried an unique simplified tiger face and the mouth was painted on the front hull.

This M24 is driving through mountainous terrain south of the 38th parallel on 29 March 1951. 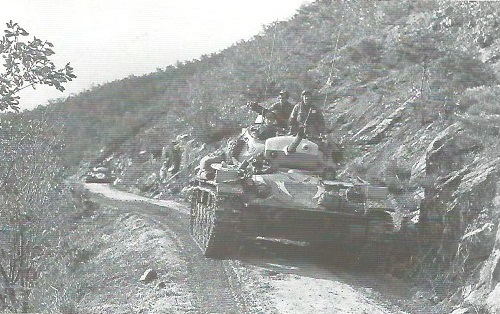 M46 tanks of company A on the line at Yangpung prepare to fire on communist positions, 6 March 1951.   The battalion’s tanks were numbered sequentially and had both .30 and .50 caliber machine guns mounted on the turret.

Warning: This film has a graphic hand wound scene.
It also shows a supporting Churchill Bridge layer tank from the British 29th Brigade.

North of Chongpyong on 2 April 1951, a M46 helps extract a platoon mate M46 from a muddy rice paddy.   The M46 in the foreground has one of the early type muffler covers which does not extend all the way down the side of the muffler.

This M46 of second platoon, Dog Company, D-10, named “Dagwood” was knocked out on the night of 25 April 1951.   The name most likely refers to the character from the 1930’s comic strip Blondie (later a radio show and several movies). 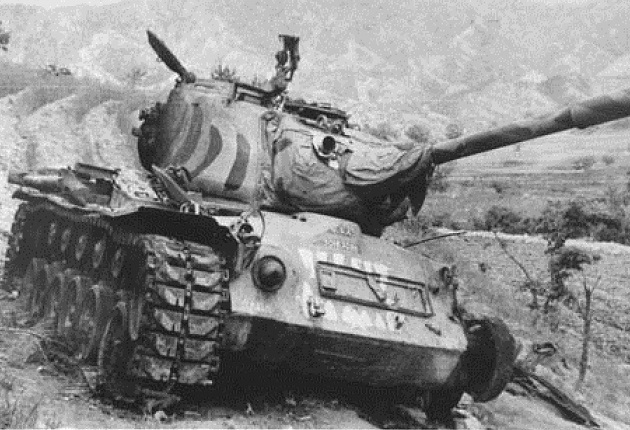 The left track this M46 was damaged by a mine and the tank is being recovered by a M26A1 tractor.

During a retreat in early April, these M46s were knocked out by enemy action.   They were recovered later when the area was recaptured by elements of the 24th Infantry Division.

This early M4A3(76) VVSS equipped with a M1 dozer blade belonging to the HQ & Service Company, 3rd Combat Engineer Battalion, 24th Infantry Division.   The tank was named “HYZER’S TIGER II” after the battalion commander, Peter C. Hyzer, and below it is the name “NANCY” painted in small white letters.   Tiger stripes were painted around the hull and turret.   It made sense to paint the teeth around the turret which made them visible over the dozer blade.

All the tanks in this company carried the tiger schemes except for the tanks in the 2nd platoon.   The tanks carried Hawaiian names on their sides such as “Mona Loa”, “Aloha”, “Leilani” and “Hula Girl”.

prepare to advance along the Han River area, Korea.

This is my close up of the cast markings on the gun mantlet.
Do not look too closely into the eyes, the right one might fire back.

This is my close up of the cast markings on the inside of the hull machine gunner’s hatch.    Click here for more information on  Foundry Symbols and Trademarks

Below the mouth on the center of the transmission housing is a red pentagon which was the badge of the 5th RCT.    The close up on the right shows a truck in the background and there is a tent immediately behind the tank.

This is supposedly another photo of the same tank above.   This tank has a tow cable draped over the hull next to the driver’s hatch while the photo above does not have a tow cable.   The soldier’s uniform indicates early spring or summer.   If the tow cable was added later, then most likely it would not been painted.   Also the mountains in the background probably would not be gray.    Can you say “photoshop”?

Some of the M46s of the battalion were painted with colorful tiger heads and paws.  The three bands on the gun barrel probably indicate the third company (c) along with the “C-22” painted on upper right edge of the glacis plate.   This tank would also had a large white star painted on the engine deck.   Note that the side track guard panels have been raised to hold additional storage in place.

This M46 carrying South Korean (ROK) troops prepares to cross the Imjin River to help secure a bridgehead.   The two bands on the gun barrel probably indicate Company B.

A M32 lifts the turret off a M46 at the 2nd Ordnance Heavy Weapons Repair Shop in Yongdongpo.   Note the name “BO-CATOR” on the front hull and the paws painted on the front fenders.

The 64th was the only segregated African American tank battalion to see combat in Korea.  Originally it was the 758th Tank Battalion which fought in Italy during WWII. After WWII, it was re-designated as the 64th Tank Battalion.   The 64th arrived in Korea in November 1950 and in early 1951 de-segregation of the unit began.   On 14 March 1951, US 3rd and ROK 1st Infantry Divisions supported by the 64th Tank Battalion liberated the city of Seoul.

This broken down M4A3E8 named “Skeeter Hawk” has tow bars attached to the front hull and it was just towed out of the Han River indicated by the ice build up on the side track guard.

The 64th Tank Battalion superimposed an elaborate tiger head over a blue and white diagonally striped square which was based on the shoulder patch of the 3rd Infantry Division.

The 64th Tank Battalion had a mixture of Shermans, M26s and M46s during the spring of 1951.   This column of M46s is traveling along a road. 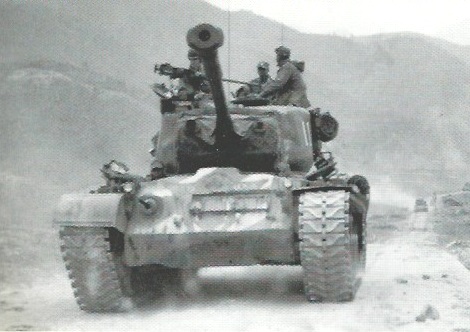 While most crews painted elaborate tiger faces on their tanks, some tanks in the battalion had a simpler silhouette painted which was either a primer coat for the face or the crew just lacked artistic talent.

A M4A3E8 carries troops of the 1st Cavalry Division in the pursuit of retreating Chinese forces in the vicinity of Chipyong. 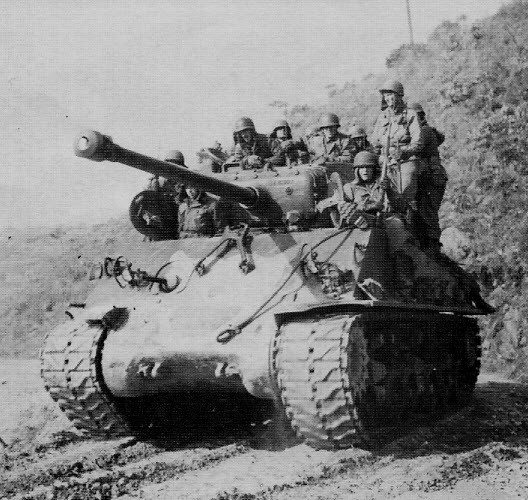 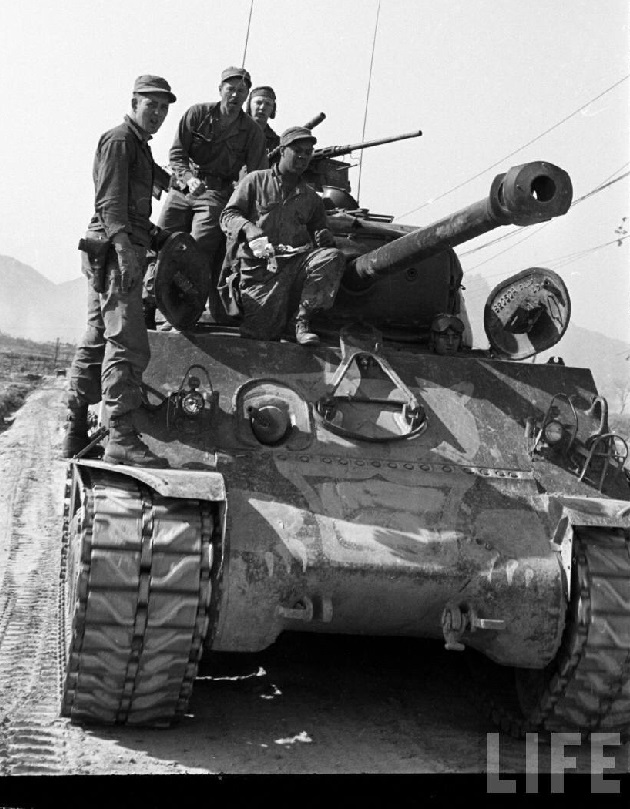 This is my close up of the inside of the driver’s hatch with casting markings. 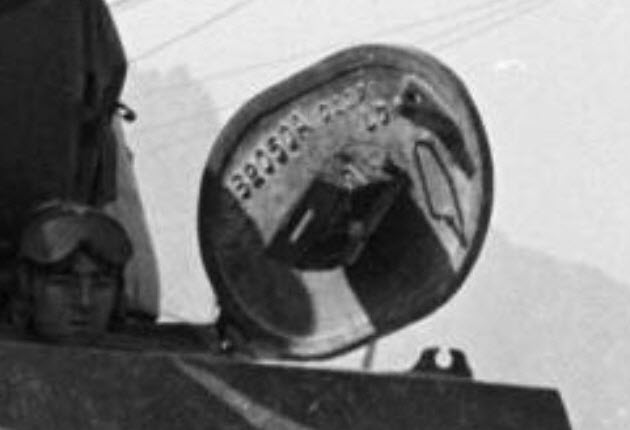 The crewmen are concern about something. 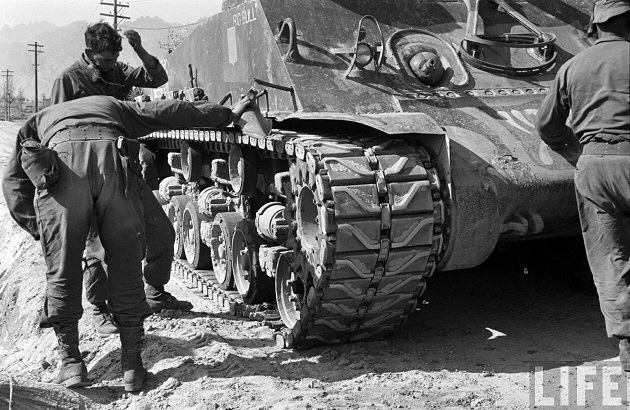 Note the first road wheel is missing its rubber and a number track links are damaged probably caused by a mine. 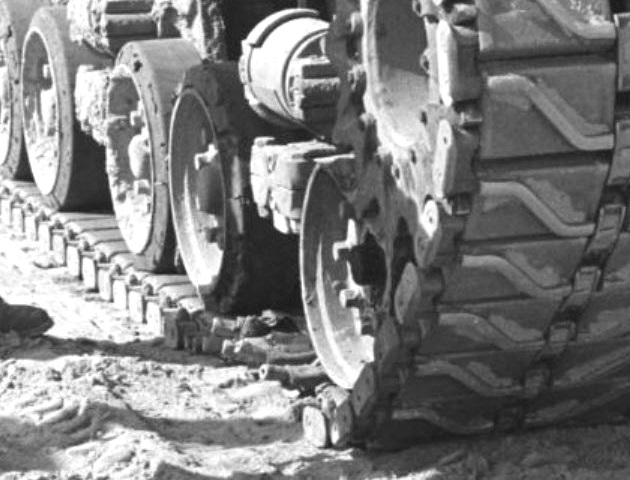 The name “BIG BULL” would indicate Company B.    On the hull side is probably a variation of the battalion’s shield.