Somewhere northwest of Hill 112 (southwest of Caen) in mid-July 1944, Churchill Mk.VII tank named “BRITON” belonging to the 107th Regiment Royal Armoured Corps (RAC) and its crew was photographed.   This tank and its crew came into the limelight when these photographs were published in an issue of a popular magazine.

The 107th Regiment RAC was formed on 1 November 1941 by the conversion of the 5th battalion, King’s Own Royal Regiment (Lancaster), a first Line Territorial Army infantry battalion.   On 8 September 1943, the 107th RAC was ordered to disperse.   Most of the regiment’s personnel was transferred to other RAC regiments and disbandment was completed in December 1943.    Three officers and 47 other ranks of the ex-107th RAC were sent to the 151st RAC which was converted from the 10th Battalion, King’s Own Royal Regiment, a hostilities-only unit created in 1940.    In June 1942, the 34th Tank Brigade consisted of the 147th RAC (formerly 9th Hampshire Regiment), 151st RAC and the 153rd RAC (formerly 8th Essex Regiment).    On 30 December 1943, the 151st RAC was re-designated the 107th RAC to carry on the name of its senior Territorial Army unit (ex 5th Battalion King’s Own) which was earlier disbanded.    On July 2nd, the 107th RAC embarked at Gosport and landed at Bernieres-Sur-Mer in the Juno Beach sector of Normandy with the 34th Tank Brigade. The regiments gathered together around Lantheuil, between Bayeux and Caen.    The 34th tank brigade was at a concentration area around Cully, France while it prepared to go into action with the 15th (Scottish) Infantry Division of the British 12th Corps in an attack to draw the German’s attention from the breakout east of Caen (Operation Goodwood).

At 2145 hours on July 15, the 107th RAC carried out a successful “last light” raid with one battalion from 2nd Glasgow Highlanders of the 227th (Highland) Infantry Brigade down the forward slope of Hill 112 into Le Bon Repos and around Esquay against the III. Bataillon, 21st SS-Panzergrenadier Regiment.    All the tanks of A and B Squadrons were in action supported by two troops of 141st RAC crocodiles while C Squadron was held in reserve behind the crest in an area which was continuously mortared at intervals throughout the evening and night.    Only four tanks were lost during the raid and the surviving crew members returned to the start line after dark riding on other tanks or on foot.    The next morning the 147th RAC was expected to support the next 2nd Glasgow Highlanders battalion and attack towards Evrecy but the minefields around Baron were not breached where flail tanks and two Churchills were lost to deep laid mines.    The following night of the 16th, the raid was called off again on account of fog.    On the 16th, the 153rd RAC with the 8th Royal Scots (44th Infantry Brigade) attacked to capture successively the villages of Garrus and Bougy and in the afternoon Tigers and Panthers accompanied by infantry counter-attacked twice forcing the regiment to withdraw.

On 17 July 1944, Sergeant Bert Hardy of No. 5 Army Film & Photographic Unit took most of the following photos of 107th RAC B Squadron tanks including “BRITON” in a bivouac  area behind the front lines during a lull in the fighting.    These photographs appeared in the 12 August 1944 issue of the Picture Post, a photo-journalistic magazine published in the UK from 1938 to 1957.   Today, some of these photographs are part of the Imperial War Museum (IWM) Collections.

The crew of Churchill tank “BRITON”:

(Some state Lieutenant Fothergill was not the CO of the 107th B Squadron.)

Trooper Macquinnes (IWM caption spells his name “McGuiness”) is touching up the name “BRITON” on the air intake. 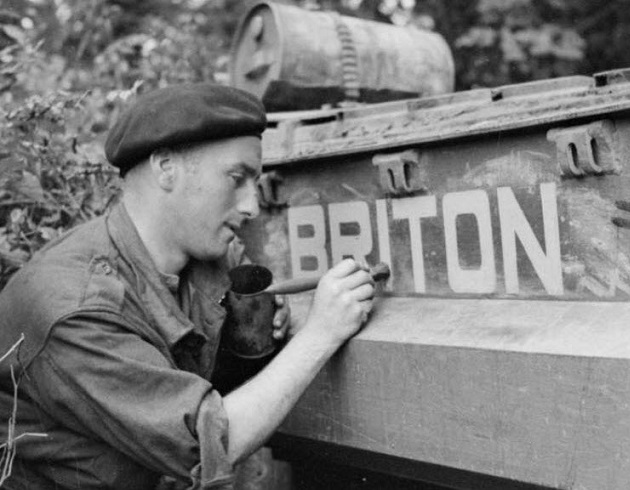 On the side of the turret, there appears to be some markings that were partially over painted or covered by netting. Also note that the center fender sections were removed probably on both sides. 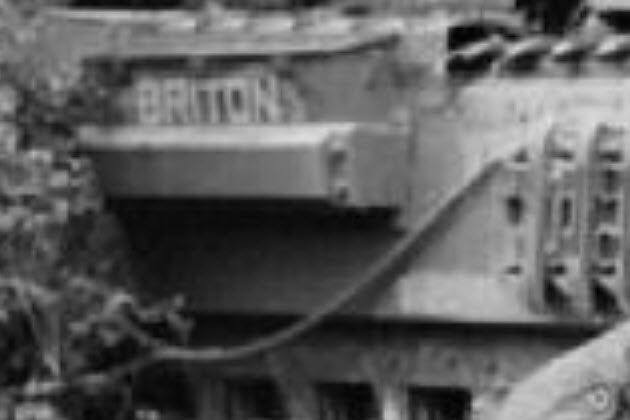 Fothergill (IWM caption spells his name “Fathergill”) is priming M36 hand grenades by screwing in the fuses.    A small plaque was mounted on the turret stowage bin indicating the tank was adopted by the his home town, Bishops Stortford.    On the left is the signal flag container and behind him is the mount for a Methyl Bromide Fire Extinguisher.    Note the 100 round circular drum magazine on the Bren machine gun which was issued for anti-aircraft use. 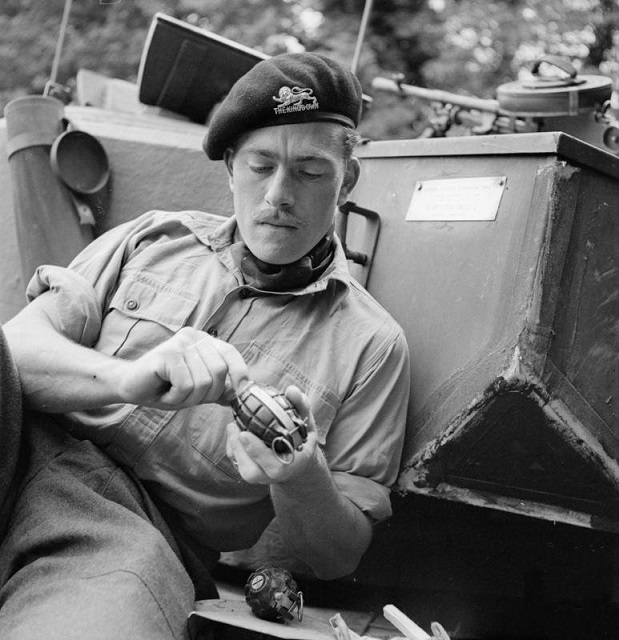 The Tamiya kits does not include the plaque. 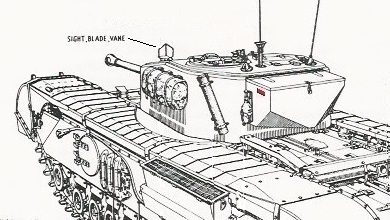 On top of the turret rear storage bin is the allied aerial recognition circled white star which was extended over the rear of the turret.    The Tamiya kits does not include this marking.     Note the muzzle of the Bren machine gun. 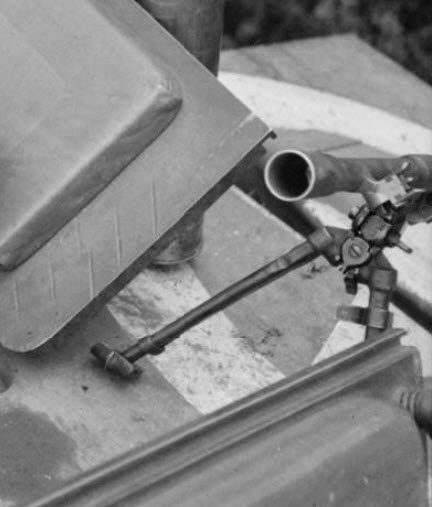 This square was located on the inside of the front fender which probably was a gas sensitive paint patch.   It would changed from yellowish green to a red colour when exposed to mustard gas.    There was probably a matching square on the opposite inside fender where both of them would be visible to the driver and co-driver. 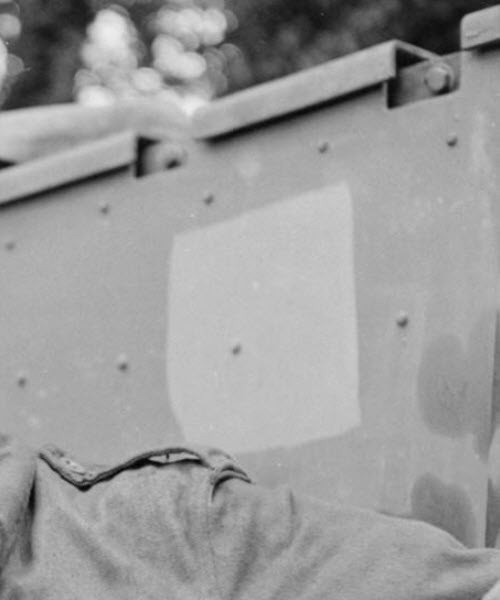 The location of the square is indicated on this closeup of  IWM B 7624. 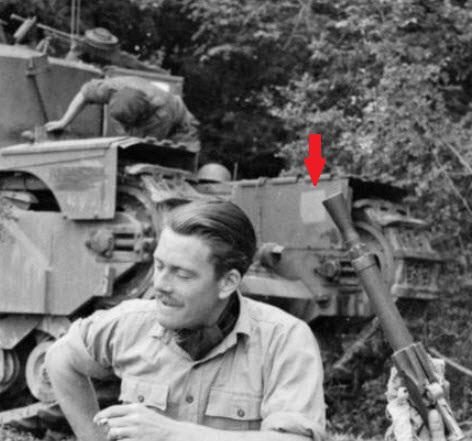 This is a closeup of the hull machine gun. 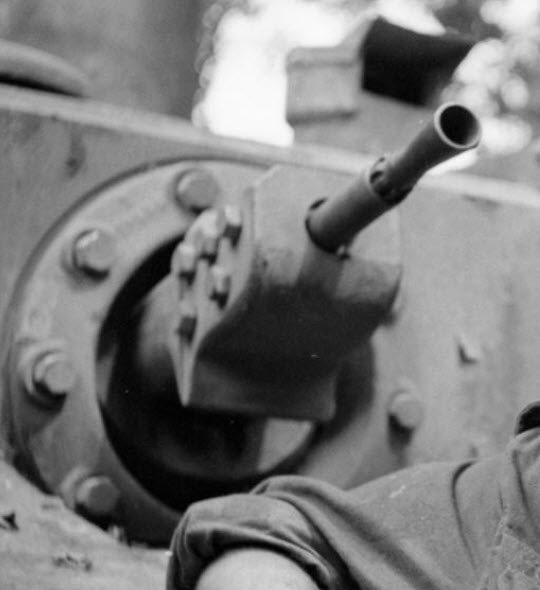 This photo shows the rear of a 107th RAC tank column. Some sources captioned the closest tank as being the rear of “BRITON” but it is not.   This tank has the signal flag container attached to the side of the tank’s turret storage bin and note the white strip on the bin edge.    In above photos, “BRITON” has the signal flag container attached to the side of the turret and the bin edge has no white strip.    Note the Bren machine gun with the 100 round circular drum magazine on top of the turret.    In 1944, the 107th RAC Arm of Service (AOS) sign was number 157 over green background with a horizontal white bar underneath it.    Most sources has it listed as 176 which was correct for 1945 when the 34th Tank Brigade was reorganized and re-designated as the 34th Armoured Brigade.    To the right of the AOS sign is the shield for the British 2nd Army.    The name on the air intake cannot be read at this angle.   Note that the number “2” is painted on a white square panel attached to the turret storage bin and was probably a column position marker of some kind. 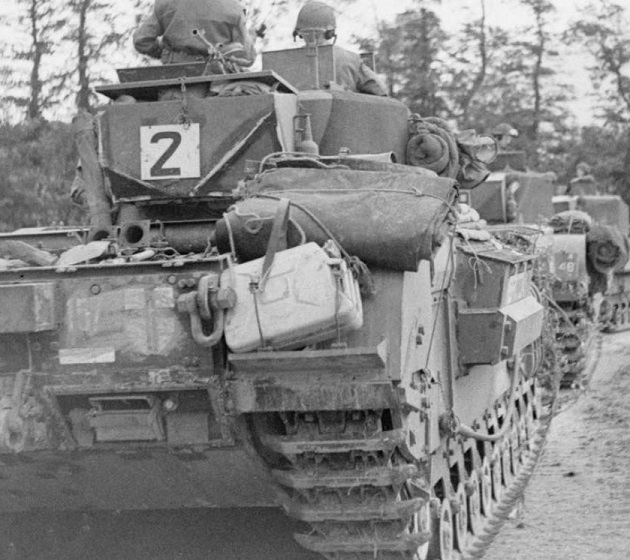 This is the netting covering and storage on the turret. 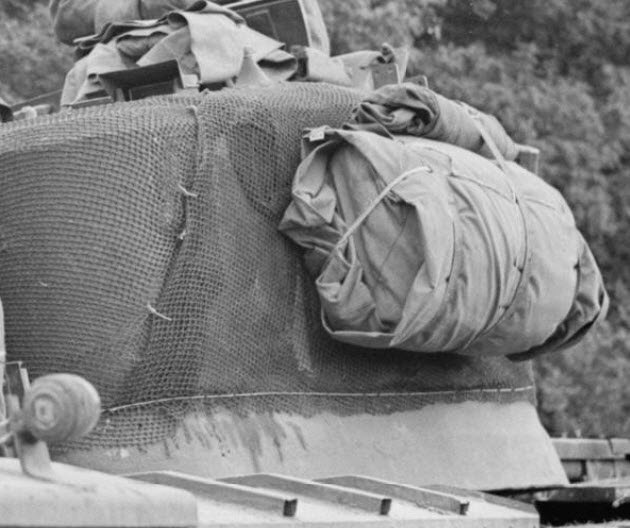 This appears to be a white band on the 75mm gun barrel.    The Tamiya kits does not include this marking. 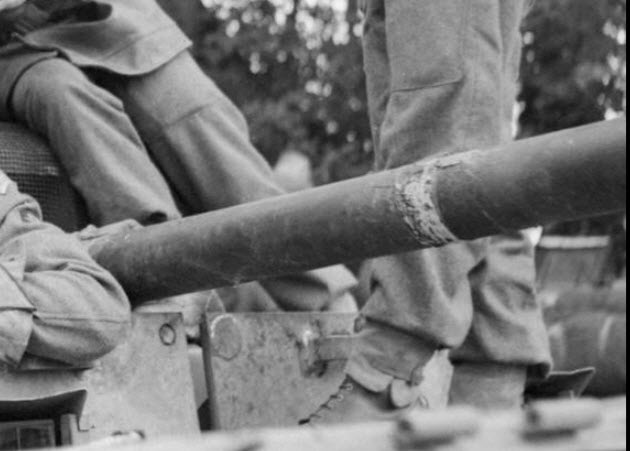 The blade sight vane on the turret. 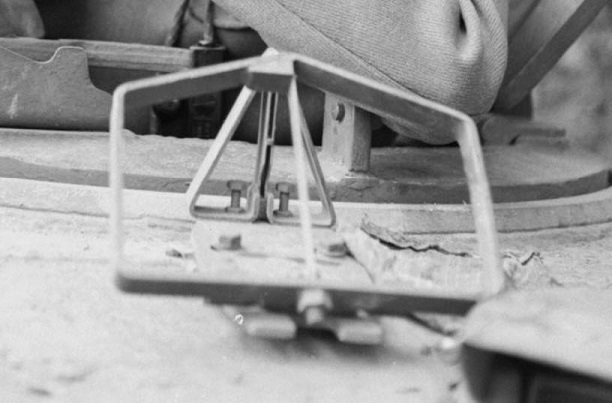 Churchill tanks of 7th Troop B Squadron.   This high angle shows that the netting does not completely cover the top of the turret.   Not able to identify the sign on the front of the turret just above the drivers hatch. 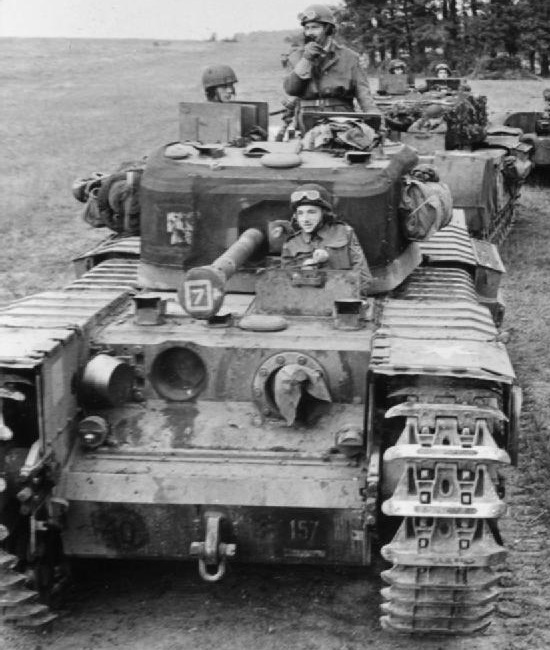 B Squadron 107th RAC Churchill tanks on the move.    This Churchill VII tank has spare track links attached to the front hull as extra armour protection. 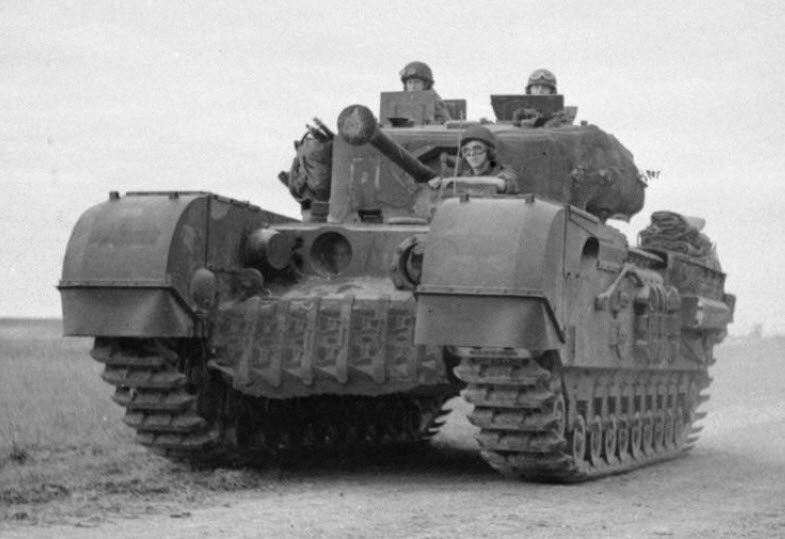 On July 18, A Squadron 107th RAC was maneuvering north of Hill12 and had a small skirmish with dug-in Tigers and two 88mm SP guns of SS-sPzAbt.102 and lost four tanks on the ridge.    While Operation Goodwood began east of Caen, the 34th Tank Brigade settled down on the perimeter of the bridgehead in support of the 53rd (Welch) Infantry Division which stretched from Bougy to the Orne River at the  village of Maltot.    A second raid in force was made on German positions at Le Bon Repos and Esquay on July 23rd.    Again the 107th RAC was used but supported the 160th Infantry Brigade of the 53rd Infantry Division.    The infantry suffered 67 casualties and the 107th RAC returned intact and towed back one of their casualties in the previous attack.    On August 2nd, B and C Squadrons of 107th RAC moved up  with the 4th Welch Fusiliers and the 2nd Monmouthshire towards Esquay and Le Bon Repos again with the same results.   On August 4th, the 107th RAC moved to the west to support the 59th (Staffordshire) Infantry Division with whom it continued to support until the 59th withdrawn and disbanded in mid-August.

On August 6, the British 12th Corps was on the banks of the Orne River with the 153rd RAC supported the 53rd (Welch) Infantry division opposite Thury-Harcourt, the 107th RAC supported the 59th Infantry Division opposite Foret de Cinglais, and the 147th RAC was initially held in reserve midway between the other two regiments.    A and C Squadrons of the 107th RAC with the 176 Infantry Brigade forded a crossing and held a small bridgehead on the east bank of the Orne River opposite Brieux and Grimbosq. On the evening of August 7th, the Germans counter-attacked heavily in force with Panthers and only a few tanks of the A and C Squadrons survived by the following morning.   At first light, B Squadron crossed the river and fought magnificently with 11 tanks (all which were able to cross the ford) until only two tanks were left.   At nightfall, B Squadron was recalled to the west bank of the river but the bridgehead was out of danger and the 147th RAC crossed over as soon as the ford was cleared and relieved the 153rd RAC.    The 107th RAC was then withdrawn completely having lost 22 tanks of which 17 were burnt out and total losses. 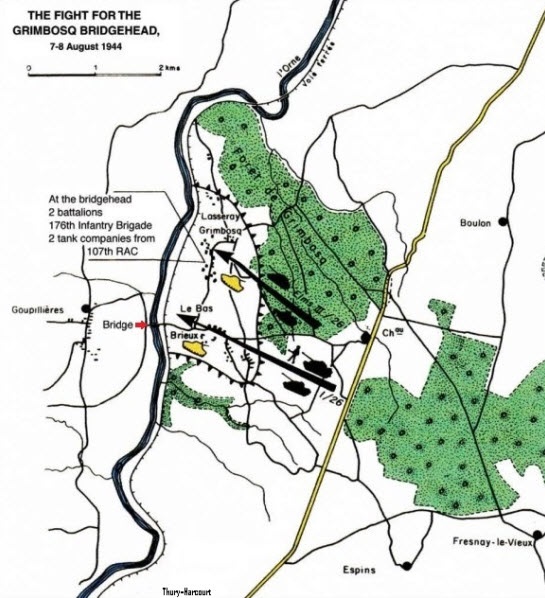 271 Volksgrenadier Division (Wehrmacht) were deployed along the Orne River from Grimbosq to north of Thury-Harcourt.

The 107th RAC was out of action for a few days while the 147th RAC and 153rd RAC continued fighting small actions and forged ahead.    The 147th RAC and 153rd RAC received the majority of the replacement tanks from the Forward Delivery Squadron.    Two days later, the 107th RAC produced a composite Squadron which was assembled from the surviving tanks of the whole regiment and on August 13th the composite Squadron was in action again.

A disabled 107th RAC Churchill IV tank near the destroyed bridge over the Orne River west of Le Bas on 14 August 1944. 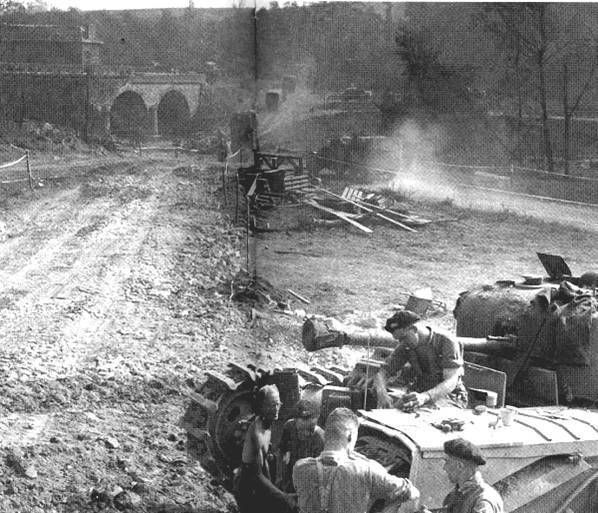 A recovery crew works on the same 107th RAC Churchill IV tank. Note the Bren carrier passing by and the Churchill ARV Mk. I in the background.    The two troopers in front center are adjusting the tank’s left track tension bolts with large spanners. 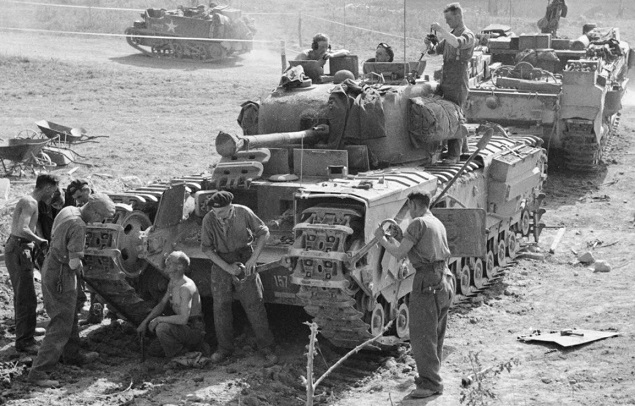 Unable to locate any information as to what happened to Churchill tank “BRITON” and its crew but Lieutenant Fothergill did not survive the war.    Fothergill is buried in the BANNEVILLE-LA-CAMPAGNE WAR CEMETERY located 11 km (6.8 miles) east of Caen.   Found this information by searching this website. 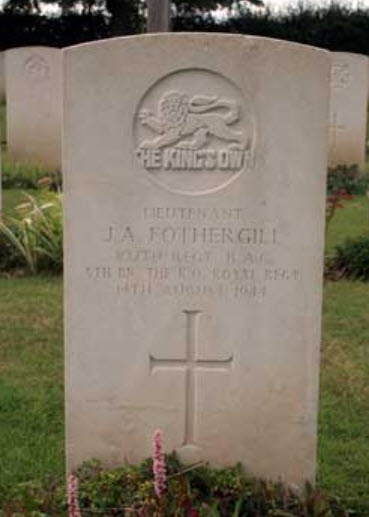