The Achilles was a British variant of the open turret US M10 tank destroyer up armed with the superior British Ordnance QF 17 pounder (76.2 mm) anti-tank gun which replaced the original US 3 inch Gun.  The conversion involved installing a new gun mantle and a counterweight on the gun barrel.  The Achilles was assigned to British, Canadian and Polish anti-tank regiments and was first used in combat in Normandy 1944.  One particular British Achilles named “CHELSEA” for a short period of time was sort of famous, not with the British but with the Germans.

Achilles Chelsea of C Troop, 245 Battery, 62nd Anti-Tank Regiment, RA (Royal Artillery), British I Corps was knocked out southeast of Escoville (east of Caen) on 18 June 1944.  The symbol on the rear hull is the marking for the British I Corps.

The 62nd Anti-Tank Regiment was formed in London in 1939 just before the start of war.  This Achilles was probably named after the Chelsea district in London or a woman.

This photo shows the other side of Achilles Chelsea and the knocked out PzKpfw IV in the foreground belonged to Panzer-regiment 22 of the 21st Panzer-Division.

This is my close up.  The census number on the rear hull side is partially faded and cannot be read. 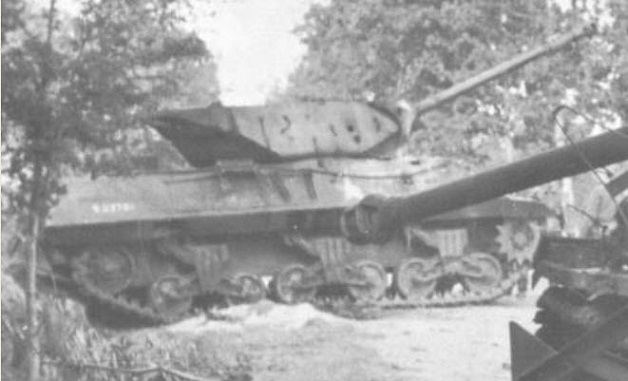 Visible in the background is the knocked out Achilles Chelsea in the middle of the road.  In the foreground are two grenadiers with a MG42 belonging to II./Pz.Gren.Rgt 125 of the 21st Panzer-Division manning a position on the side of the Bréville-Escoville road facing north.

In the spring of 1944, 245 and 248 batteries were equipped with M10 Achilles tank destroyers.  On the evening of June 5, 245 and 246 batteries sailed from Tilbury while 247 and 248 batteries sailed from Southampton and on D-Day the regiment arrived off the Juno invasion beach in Normandy.  The 246 and 248 batteries landed and were attached to the 7th Canadian Infantry Brigade of the 3rd Canadian Division while the 245 and 247 batteries were initially held in reserve.  The LST (Landing Ship, Tank) carrying 245 battery beached at Graye-Sur-Mer on the morning of June 8 and its 12 Achilles moved up to a reserve position on the Reviers-Tailleville road.  Within 24 hours of landing, the 245 battery was transferred to the eastern sector of the beachhead to support the British 3rd Infantry and 6th Airborne Divisions.

The 51st Highland Infantry Division landed in Normandy on June 7 and spent a brief period supporting the 3rd Canadian Division.  From June 11, elements of the division had crossed the Orne river bridges and took over positions along the southern front east of Caen, and by the June 14 the Highlanders took control for all the area between Longueval and Escoville.  Southeast of Escoville, the 5/7 Gordon Highlanders of the 51st Division occupied a road triangle and made it a fortified strongpoint.  To the northeast of the road triangle is the Bois de Bavent (Wood of Drool) which was defended by the 5th Paratrooper Brigade of the British 6th Airborne Division.

On June 16, Panzer-Aufklarungs-Abteilung 21 of the 21st Panzer-Division attacked to take Escoville and then north to Herouvillette.  The strongly defended road triangle was a threat to the rear elements of the attack force that had advanced to Herouvillette and along with extremely heavy allied artillery fire to the west of the triangle, the Aufklarungs Abteilung was forced to withdraw from Herouvillette and Escoville.  German artillery fire aided the unit’s withdrawal and two armoured vehicles and a halftrack were lost.  From the south, II./Pz.Gren.Rgt 125 grenadiers renewed the attack on the road triangle and overran the foremost positions but the British counterattacked. Two PzKpfw IVs of Panzer-regiment 22 moved forward and were knocked out by a 6 pounder (57mm) AT gun.  The 5/7 Gordons were weakened and eventually forced to withdraw north of the triangle.  By midnight the road triangle was firmly occupied by the Germans.  At 1730 hours, II./Pz.Gren.Rgt 125 supported by Panzer-regiment 22 panzers attacked from the road triangle northwest towards Escoville.  A 17 pounder AT gun was knocked out but another 17 pounder AT gun knocked out two panzers and the attack stalled.  At 1930 and at 2030 hours, renewed attacks also failed. At the end of the day, I. Abteilung, Panzer-regiment 22 lost 6 panzers and 6 more were damaged.

There was no fighting on June 17 allowing both sides to regroup and replace their losses.  On June 18, II./Pz.Gren.Rgt 125 grenadiers supported by Panzer-regiment 22 panzers attacked along the weak boundary between the 51st Infantry Division and the 6th Airborne Division in the Bois de Bavent which resulted only in small gains where four British vehicles were destroyed.  The 5/7 Gordons supported by 245 Battery, 62nd Anti-Tank Regiment counterattacked and in this action Achilles Chelsea was knocked out near the northeast intersection of the road triangle.  On June 18, the 62nd Anti-Tank Regiment only listed a Lieutenant P. Loose as MIA.  The area became stable and quiet for the next four weeks with only local patrolling by both sides.

The circle on this map shows the approximate area where the Achilles and PzKpfw IV were knocked out.  The eastern road of the triangle which heads north was the boundary between the British 51st Infantry and 6th Airborne divisions.

This is my close up of the aerial photo.  The red dot was the approximate location of where Achilles Chelsea and the PzKpfw IV was knocked out and the green dot was the location of the two grenadiers at the intersection MG post.  The vehicles cannot be seen due to the trees in that area covering the road. 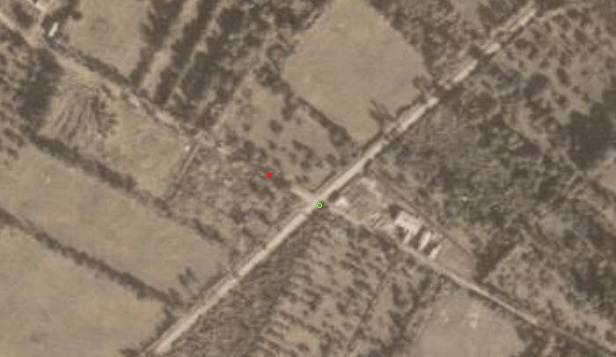 Achilles Chelsea then became an interest to the Germans where groups of officers and panzer crews examined it with interest.  At the time, the Germans were not familiar with the Achilles, only the British Sherman Firefly which was also armed with the same 17 pounder gun and the Germans often mis-identified the Achilles.

This well known Bundesarchiv photo (Bild 101I-299-1818-05) has been published many times.  Oberleutnant Schmidt, CO of the 1. Kompanie, Panzer-regiment 22, is pointing at the shell holes that penetrated the side of the turret.   The photographer must had been standing in front of the knocked out PzKpfw IV to take this photo. 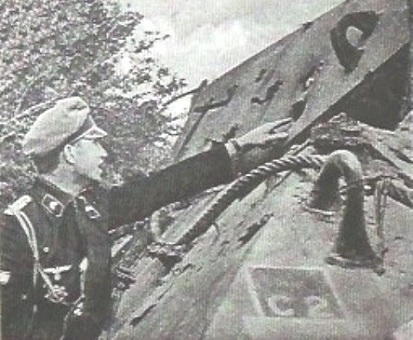 This is my close up of the 3 turret hits.  Note the shell hole on the side of the turret mantlet just below the lifting ring.

Schmidt and crewman on Achilles Chelsea examining the shell holes in the turret.  The remains of a crewman was still in the Achilles when these photos were taken. 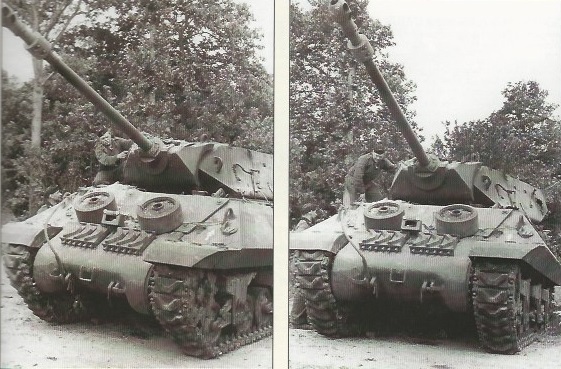 German propaganda described the engagement (in German) as this:

West, Duel at eight meters. In the area of Caen, a singularly unique tank duel took place, the end of which is reported by these images.  A German tank, type Panzer IV, and one English “General Sherman” unexpectedly came face-to-face with each other in a forest, when both opened fire simultaneously, at a distance of only eight meters.  For the two adversaries, the duel had an mortal conclusion: for the “General Sherman” as well as the Panzer IV.

(“West” is referring to the western front.)

Not able to find any information on this engagement.  It is very unlikely that these two simultaneously knocked out each other.  There are a number of possible scenarios which could leave them in those positions and Achilles Chelsea most likely was not attacking alone at the time of the engagement.

The British launched Operation Goodwood with the objective to complete the capture of Caen.  This photo have been taken on July 18 or later after the area was retaken by the British.  Three British soldiers were killed/wounded by mines and booby traps around the two knocked out vehicles.

Note that the Achilles is missing its front fenders, tow cable and the spare road wheels.  The crewman remains was finally removed from the vehicle. 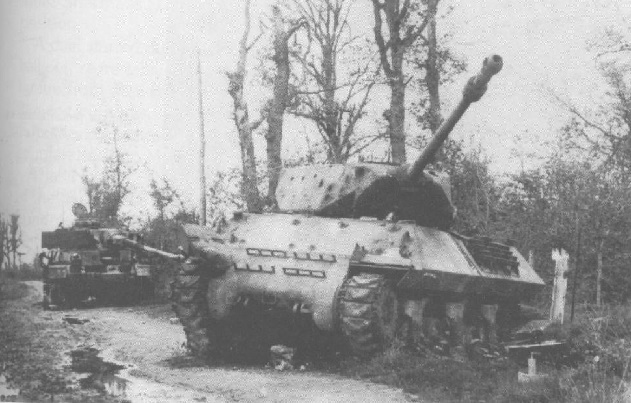 This photo shows the front of the destroyed PzKpfw IV on the road near Achilles Chelsea. Note that the PzKpfw IV has no shell hits in its front armour.

The red dot and circle marks the approximate location today.

This is the view down the same road today and the post position (most likely not the same post from 1944) can be seen on the right. 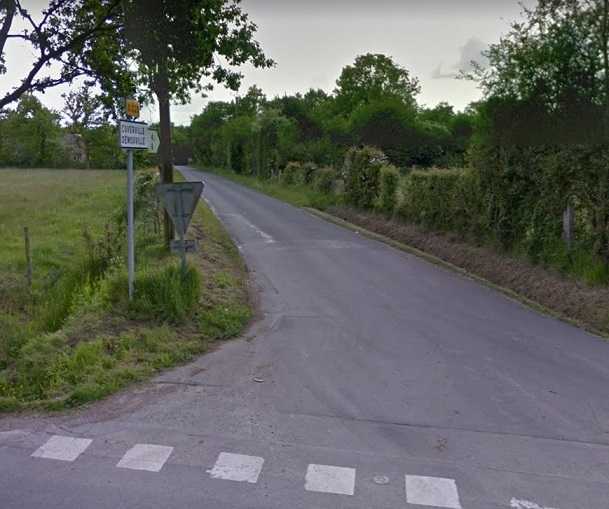 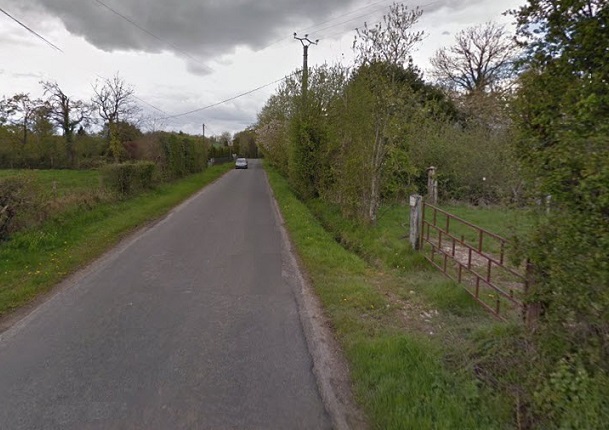 This is the view on the road facing east and the intersection can be seen in the background.